Imagine making a pie, but this pie takes a year or more to bake. Before that, you spend weeks looking at recipes, reading cookbooks late into the night, and tasting ingredients. You spend months rolling out piecrust and kneading it back together to try again. After you’ve fluted the crust with knife-edge precision, a level, and a ruler, you begin throwing the contents of your spice cabinet together like a mad culinary artist.

By the time you pour the filling into the shell, you’ve mixed up twelve different bowls (this one with more cinnamon, this one with more ginger, less vanilla in this one, this one you tried the butter at room temperature) before it finally smells like perfection. The countertop is littered with eggshells, puffs of flour, dirty spoons, and the sink is overflowing, but this, this is ready.

With a deep breath, you slide it into the oven. But even at this point, anything can still happen. The crust starts to sag. The filling bubbles over. One edge is traitorously turning black. The whole thing is going to turn into a sticky patch of half-burnt, inedible goo.

But then, somehow, the timer buzzes and you pull a beautiful, hot pie from the oven. You set it out on the table, sweaty, proud, and a little nervous, but you’re ready to share what you’ve made. There you stand, clutching your oven mitts together.

The first person you ask says no thanks, they’ve already eaten five slices. The person next to them is more of a cake enthusiast. Someone else is too busy talking to even think about dessert. Time goes by, and the warm steam wisps away from your pie. No one wants what you’ve made.

For a writer, rejection feels a lot like that.

Perhaps it’s because the holidays just happened and there is still an abundance of pie in my house that I got to thinking about it in these terms today. This morning when I opened my email—the requisite, first compulsive checking of the day—there was a rejection letter waiting for me.

I thought I’d gotten a bit better at finding these little notes in my inbox, but it’s been a while since I’ve seen one. Mostly it’s been a lot of radio silence out there in the world after I’ve sent my parceled words away with a kiss and prayer.

The significance of this letter wasn’t obvious to me until I moved it over into a folder where all the other rejections live. Up at the top of the page was a little notification—as of today, there are 100 rejection letters in my file. And those are just the ones that I’ve heard back from. If I counted all the implicit no’s, the ones with blank spaces under the “Response” column of my submission record, I’m sure I’d have even more.

Rejection is part of a writer’s life. There are so many variations of this truth that it’s a mantra of sorts among writers—muttered in conferences with waved coffee mugs, mumbled at open emails, and whispered over torn envelopes. It’s true that getting turned down is how we grow. When we first start to cook or write, we often forget to put the eggs in and drop plot threads. We swap salt for sugar, stilted phrasing for realistic dialogue. We learn to be more careful, more intentional about what we put into our work. And when we can whip up a soufflé like no one’s business, we think, How could anyone say no to this?

With the holidays just here, it’s even easier to put into words. Who wouldn’t want the incredible turkey that had to brine for sixteen hours and cook for five? Why wouldn’t Great Grandma’s cherry salad get eaten? What kind of person would say no to fresh butter rolls?

But no matter how much we gear up, no matter how often we tell ourselves we eat rejection for breakfast, it still tastes bad. It stings. Many of the letters in my folder are polite and professional, but regardless of how nicely the email closes, it still holds the smarting bite of no.

No one wants what I have made.

My mom’s side of the family is Italian, and with every passing holiday, I have the growing realization that I’ve inherited quite a bit of that heritage, especially a passion and need to feed people tasty food. So when people don’t want to eat something I cooked, it’s particularly hard not to get a bit teary about it. Even if everyone has had three plates of food beforehand, I still get sad when there is no room for pie.

There is an upside to this, though. With writing and pie both, there is always later. No’s can and often do mean Not now, but maybe later. This is why I have to keep going.

Chances are, your writing is what someone needs even more than pie.

I don’t keep my rejection letters as a reminder of failure. Don’t get me wrong—it’s all too easy to open that folder up and think I have nothing anyone would want. But I strive every day to see it as something better. It’s a record that shows I’m still learning. I’m still trying. It shows that I believe in what I’m doing, even when it feels like no one is saying yes or saying much of anything at all.

We only get better with practice, and if 100 rejections isn’t a good warm-up, I don’t know what is. There’s something ahead that my best is needed for, and if I need to ruin more cakes or wrestle more stories to train for that, I’m ready for the next 100. 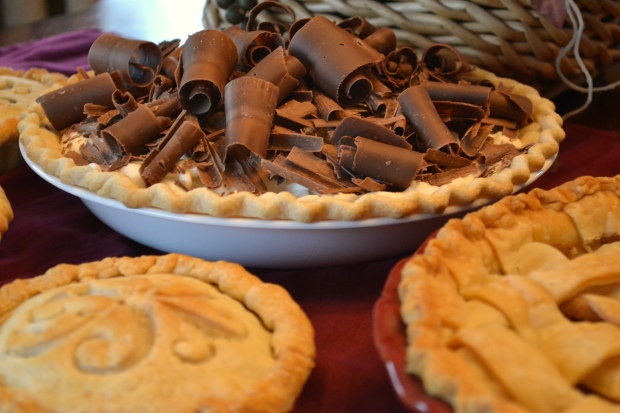 What Do You Think? Cancel reply